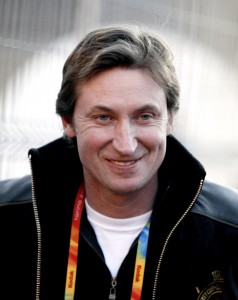 Throughout the history of ice hockey, there has been several great players that truly deserve their place in the Hockey Hall of Fame. Among these, we find Wayne Gretzky, often attributed with the nickname “The Great One”. No doubt, Wayne Gretzky is among the finest ice hockey players that have ever lived, and most professional commentators and plenty of players themselves would dare to say that Gretzky is the best ice hockey player that has ever been on the rink. Yes, Wayne Gretzky is an unmatched player that is a true living legend. Coming from a humble Canadian home, he started his ice hockey career at an extremely young age. Already at the age of three, he was showing great skills on the ice, and as a six-year-old child he was easily getting around players four-five years older than him. This was still in the early stages of ice hockey history, and his professional career actually started in the WHA (World Hockey Association), which later flopped and merged with the growing NHL. Wayne Gretzky played shortly for the Indianapolis Racers, a team that went bankrupt and had to sell Gretzky to Edmonton Oilers, where he spent a big part of his career.

Time with the Oilers

Edmonton Oilers were already a good team in the WHA, and when the league merged with the NHL he was already a player to be reckoned with. He continued his career at Edmonton after the team joined the NHL, and established a bunch of records that are unbeaten to this day. In fact, Wayne Gretzky holds more than fifty NHL records up until this day, and it seems like there is absolutely no way for anyone to achieve what Gretzky managed to do. He was a truly remarkable player, both in terms of assisting his teammates and scoring goals for himself. He is still the only NHL player to reach more than 200 points in one single season. Achieving this just one time is an unimaginable feat, something any player could be proud of until the end of his career – Gretzky, however, managed to achieve 200 points four times! Gretzky had a huge influence on the game of ice hockey, mostly because of his intelligence and willingness to play closely with his teammates. It is widely believed that it was Wayne Gretzky that truly made ice hockey a team sport. There is much more we could say about this great ice hockey player, but if you have any interest in the sport whatsoever, you probably know a lot about Gretzky already. 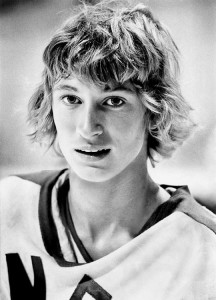 There is actually a funny story behind the famous jersey with the number 99 on its back, that Gretzky used in his career. During his younger years, Gretzky wanted a jersey with the number 9, in order to honour his favourite ice hockey player at the time – Gordie Howe. The number was however already taken by a different teammate, so the coach suggested that Wayne could use 99 instead. The number stuck, and Wayne Gretzky is the only player who is allowed to use this jersey in the NHL. Yes, you read it right. The NHL retired his jersey, as they had done with several other players previously, but the number 99 was retired league-wide, meaning that no other player will ever be able to use this number, no matter the team.

By the age of 27, Wayne Gretzky had already led his team, the Edmonton Oilers, to four Stanley Cup victories. A bunch of terms and nicknames for the great player appeared during this time period, but the future still held an even brighter spot for this maverick of a hockey player. In 1988, he was traded to Los Angeles Kings, a young ice hockey team from California that did not really achieve much in NHL before Gretzky joined the team. Because of his impeccable talent and high intelligence, his transfer to the LA Kings had an immediate effect on the performance of the team. Wayne Gretzky led them forward, cooperated with everyone, and took his new team all the way to the Stanley Cup finals of 1993. He actually managed to score a goal for the Kings with his very first shot, in his first game of the season. By the end of the season, the Los Angeles Kings were on top of their division, and Gretzky was suddenly forced to play against his old team, the Edmonton Oilers, in the playoffs. Surprisingly for most ice hockey fans, but not for those who followed Gretzky closely, the Kings managed to beat the Oilers after a series of hard, tough games. To his own surprise, not one single Canadian spectator booed at him during these games.