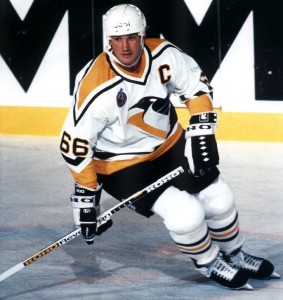 Mario Lemieux is one of the most famous ice hockey players of all time, alongside Wayne Gretzky, Gordie Howe, Jaromir Jagr and a few others. Lemieux separates from the crowd, though, in a number of different ways. First of all, his size. The French-Canadian was a very tall, large man who still managed to move around on the ice like a feather – what he did in his central position and the way he got around his opponents was absolutely incredible to look at. This is no doubt a great player, but he unfortunately suffered from a series of health problems, stopping him from breaking even more records and leaving an even greater mark after himself in the history of ice hockey. Mario Lemieux was a true playmaker, never selfish, always thinking about the teammates and cooperation instead of looking for selfish opportunities. Even though he could. Truly, if Mario wanted to, he could probably score most of the goals himself, but no – he shared his talent with the rest of the Pittsburgh Penguins. From the very start of his career, it became clear that Mario Lemieux would be a great one. Already while playing in the Junior Hockey League home in Montreal, Canada, he stated that his goal was to break every record possible. And by 18, indeed he did, with a new league record for overall points. Teams from the NHL were already lined up to draft him when he turned 20, and it was a fierce battle that went on behind the scene. 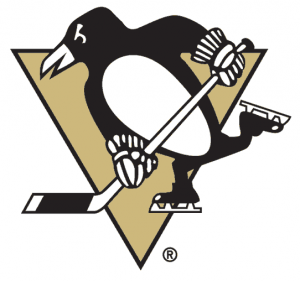 Mario Lemieux was a player of great stature and with a passion for the sport that was only surpassed by his willingness to drag his teammates after him. Pittsburgh Penguins were not a good team, they never were, actually. Most of the time their stadium was half-empty, even when famous teams from other states came to town. However, Mario Lemieux stayed with them through his entire career. Yes, the ice hockey player, one of the greatest throughout history, stayed with the first team that drafted him as a youngster for a staggering 17 seasons. You can bet that other teams wanted him, but he felt at home in Pittsburgh and did not have the heart to leave his teammates. With his help, with his big heart and incredible love for the sport, he managed to lead the Pittsburgh Penguins out of the shadows and into the light of glory. With his help, and, mostly due to his sole effort, the Penguins actually managed to lift the famous Stanley Cup two years in a row – both in 1991 and 1992. At the same time, he was playing in the NHL All Stars Team, and also as part of Team Canada in the Olympics and the World Championship. Unfortunately, the health problems started affecting him very early in his life, and he battled through both cancer, tendinitis and other serious illnesses. These health issues made him retire early on, back in 1997, and he was inducted straight into the Hockey Hall of Fame. However, after three years of medical care and numerous treatments, Mario Lemieux came back on the ice. Back out of retirement, with a chronic back pain which hurt so bad from time to time that his teammates had to tie his skates for him. In regards to the teammates – you can probably guess which team he went back to in the year 2000, after three years off the ice? That’s right, the Pittsburgh Penguins.

Back to the top 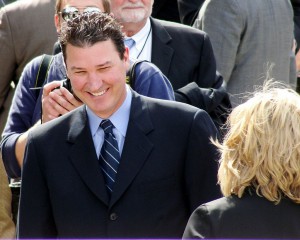 Even with severe health problems, Lemieux continued to outperform his competition on the ice. By that time, Pittsburgh had grown substantially and managed to sign another great legend of the game – Jaromir Jagr. Together they managed to bring the team back to the top, but the Penguins did not manage to win the Stanley Cup again, even with Lemieux and Jagr on the ice. The Czech disappeared as soon as the Penguins ran into financial trouble, but Mario stayed until the very end. Not just until the end. When he finally retired completely in 2006, after almost two decades on the ice, it still did not stop him from helping the Pittsburgh Penguins move forward. Yes, Mario Lemieux became one of the ice hockey club owners, actually! With his help and guidance, the Penguins managed to finally lift the prestigious Stanley Cup trophy again in 2009. This makes Mario Lemieux the only person out there who has his name written on the famous cup both as a player and as an owner.

Mario Lemieux played at the same time as Wayne Gretzky, another Canadian player who truly deserves his place in the Hockey Hall of Fame. Lemieux was chasing Gretzky throughout most of his career, and this fuelled his competitiveness further. When they played together as part of Team Canada, though, it was a magnificent sight. This was the Dream Team of Canada, and the national team was unstoppable. Lemieux is also one of only a few players inducted in the Hall of Fame who came back and continued to play.