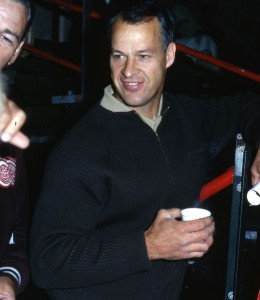 In the early days of ice hockey, the sport was quite different from the one we see on TV today. Rules were a bit different, safety was completely disregarded, and even the hockey sticks themselves did not look the same as they do today. The sport was still evolving, and two major leagues were going on at the same time, competing with each other instead of helping ice hockey grow internationally. We are talking about the NHL and the WHA, of course. Still, even though a lot of turbulence slowed the evolution of ice hockey down, a few legends came sprawling out already in the 1950s. Legends that would come to lead the way for ice hockey as a whole, legends that would make the sport what it is today. Gordie Howe is one of those legends. Truly a one-of-a-kind player, a great overall man and one of the highest ranking of all time, Gordie Howe truly deserves his nickname – “Mr. Hockey”. He started his career directly after WWII, in the early days of the National Hockey League. He devoted most of his career to the Detroit Red Wings, and still holds the record for most seasons played all in all. Gordie Howe inspired thousands, if not millions of young hockey players around the world, especially back home in Canada. Wayne Gretzky saw Howe as his biggest influence, and actually wanted to wear the jersey number 9 when starting his career. As the 9 was taken, he went for the 99 instead – a choice that stuck though history. Gordie Howe is “the” number 9, and most ice hockey players will always associate this jersey with Mr. Hockey. Detroit Red Wings became the legendary team they are today much thanks to Gordie Howe, as it was this man who helped them evolve and try out team tactics, which was almost unheard of at the time.

Gordon “Gordie” Howe stayed with the Detroit Red Wings through most of his career, through an incredible 25 seasons. During this time, he reigned the hockey world as an unmatched star. Gordie Howe was setting record after record, and played ice hockey on a level way ahead of his time. Among some of his main traits was the ability to play both left- and right-handed, as well as an extremely strong shot and a tactical sense beyond anything at that time. In fact, it was not until he retired in 1980 and new, fresh players like Mario Lemieux, Jaromir Jagr and Wayne Gretzky appeared on the ice, that any of his records were broken. He was a great player, a man of global dimensions. With his help, Detroit Red Wings managed to secure themselves four Stanley Cups, all of them in the 50s. He just could not stop playing, this maverick of a Canadian. Even though he initially retired as a 43-year-old living legend, he did not manage to stay off the ice for too long, and was soon to be found in the WHA together with his two hockey-playing sons. He then did a quick comeback in NHL, already more than 50 years old, and managed to play a season for the Hartford Whalers before he finally retired completely in 1980, being 52. It was his tremendous passion for the game and his willingness to continue where others stopped that gave him the nickname Mr. Hockey, and inducted him in the Hockey Hall of Fame already in 1972. Through most of his career, he was a top-scorer. Year in, year out. Together with Sid Abel and Ted Lindsay they formed a trio known as the Production Line because of the easiness with which they scored goals. In fact, in his fourth season for the Detroit Red Wings, the three went on to become top scorers in the league overall. Three guys from the same team, top scorers in the same season. Unbelievable. 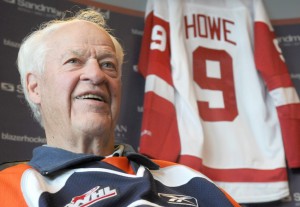 Gordie Howe loved to fight on the ice. He fought in most of his games, and won most of his fights. There is even a funny expression attributed to his incredible skills both as a goal scorer, playmaker and fighter – the Gordie Howe Hat Trick. This basically means to score a goal, one assist, and win a fight, all in the same match. Gordie Howe saw five decades of NHL history being made, and influenced the sport on a much higher scale than more recent legends of the game. Since he was there from the very start, Howe managed to affect the game in-depth and from early on, before the dogmatic organisations came to dominate the NHL. Call him Mister Everything, The Legend, The Number 9, Mister All-Star, Mister Hockey, or just Power – all these nicknames suited Gordie Howe perfectly.